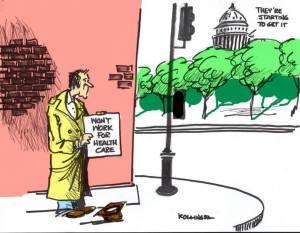 I started the discussion last week as part of a review of the alternate health care delivery models. I mentioned the concierge delivery model, but only briefly described the model. Physicians trying to follow their passion of caring for the sick and needy are considering how they are going to survive? How they are going to pay their bills, in light of the Affordable Care Act (ACA)? There are and will be more concerns with the demands of the ACA management issues and decreasing reimbursements as well as the increasing demands for quality care with more time being spent on administrative duties. So, how do we the physicians survive? How do we convert the practice to a sustainable health care delivery model?

The problems facing physicians in practice hit me especially hard this past week when I was notified that one our physicians had committed suicide. More and more of the doctors are reporting burnout and or going into other fields “retiring” at earlier and earlier times in their professional careers. How do we pay the bills? How do we manage the stresses of our practices and the increased oversight and demands of a government run health care system?

I had an experience also with one of our local internists who was having difficulty paying his staff due to the high Medicare and Medicaid patient population in his practice. We had a long chat and he pursued researching the concierge delivery model. I made him aware that initially he might get “push-back” from his patients as well as from his fellow physicians. He decided that this model would be the only way to survive in our region as well as the potential problems of the “new” health care system- the ACA or as some label it- Obamacare.

Sean Hockenbarth reported in her article “by October, the law had already created 11,000 pages of regulation. It has added thousands more since.

Doctors, hospitals and insurers must hire armies of lawyers and administrators to make sense of this system. This leads to mountains of paperwork. I’ve had to hire extra staff to fill out forms, file them and fax them. Even for a private practice doctor like me, this dramatically increases costs while worsening the patient’s experience. This also explains why doctors rarely spend enough time with patients. We’re forced to do paperwork, too.”

The end results are seen as higher health care costs and they will continue to rise.

Richard Gunderman states that such concerns sound especially familiar to many of the 210,000 or so U.S. primary care physicians, a group that includes family physicians, general practitioners, general internists, general pediatricians, and geriatricians. Though they comprise less than one third of all physicians, they account for half of all physician office visits, and for most patients, they are the physicians of first resort. Yet morale is declining, and at a time when many experts foresee a need for an additional 50,000 primary care physicians in just the next 10 years. The outlook for the patients and communities they serve is not bright.

And a recent survey cited by The Wall Street Journal disclosed that about 7 percent to 10 percent of physicians plan to transition to cash-only practices in the next one to three years.

“With doctors already spending 22 percent of their time on nonclinical paperwork, they will find more government intrusion under Obamacare regulations taking even more time away from patient care,” according to the Journal article by Dr. Scott W. Atlas, a physician and a senior fellow at Stanford University’s Hoover Institution.

More Americans are likely to opt for concierge medicine as they experience more difficulty finding a doctor willing to treat them. The Association of American Medical Colleges estimates that the nation faces a shortage of more than 91,000 physicians by 2020.

Already, about one-third of primary-care physicians and a fourth of specialists have completely closed their practices to Medicaid patients, and more than half of physicians have limited Medicare patients’ access to their practices, or are planning to.

Many of these doctors refuse patients due to inadequate payments from Medicaid and Medicare and will now assess the new patients coming into the system which are covered by a Medicaid type of system through the exchanges.

“At the same time,” Dr. Atlas noted, “Obamacare is squeezing out the middle class from affordable private insurance that correlates with far better disease outcomes than government insurance.

As the frustration mounts more and more American doctors are increasingly turning to concierge medicine, where a patient pays a primary-care physician an up-front retainer and in some cases additional fees in exchange for special attention and enhanced care. These retainers can cost as low as a few hundred dollars to as high as $5,000-$7,000 per patient per year.

What do the patients get in exchange? They will receive a two-hour annual visit with a complete physical exam, same-day appointments, 24-hour physician phone access, and personalized, web-based resources to promote wellness.

When patients get admitted to the hospital, their doctor will remain their physician, and their health insurance will still pay for much of their care.  Will it make more money for physicians? Most physicians using this model to deliver health care doubt it, but if it does, they usually plan to plow the additional income they might derive back into their practice, helping to lessen the economic pressures.

The concierge model of practice is growing, and it is estimated that more than 4,000 U.S. physicians have adopted some variation of it. Most are general internists, with family practitioners second. It is attractive to physicians because they are relieved of much of the pressure to move patients through quickly, and they can devote more time to prevention and wellness.

Physicians see this type of model as advantageous. They will be able to spend more time with their patients, build better relationships, and provide better care. And there is mounting evidence that such practices produce better outcomes, such as reductions in hospitalization rates.” At the top of the physicians goals is preventative health care.

Of course, there are drawbacks to concierge practice. For one thing, some patients cannot afford it, and others will choose not to pay the fee. As I noted last week some critics also see such models as promoting a two-tiered system of healthcare, in which those with more money get better care.

But if you look at history, we have always had a two-tiered system, and it is better to care for 500- 600 patients well than just adequately for three or four times that number with office visits lasting only 8-11 minutes. I believe and other authors agree that someday patients, physicians, and healthcare payers will recognize that slower-paced but truly high-quality medical care is a better value than the fast medicine many physicians feel pressured to practice today.

Concierge medicine is adopting doctor’s way of tapping into the best of medicine’s past to chart a brighter professional future. By adopting a concierge model of practice, the physicians are trying to expel an expanding cast of characters who have interposed themselves between patients and physicians: people with forms to be filled out, stopwatches to be obeyed, and cash registers to be fed. They hope to build a future in which only one person will be in the room with every patient—the physician—and every physician will be free to practice with the level of patience and dedication they believe good medicine requires and allows the creation of trust between the patient and the physician.

I also, one other health care delivery model will be the persistence of the Doc-in-the Box or Mini-Clinics, some of which will be located in the CVS, Rote-Aid, WalMart and managed by nurse practitioners or physician assistants. So, if you want to invest your money, find the companies who set up these clinics. The Affordable Care Act and the waiting times and inefficiencies, or “efficiencies” from this health care reform will push patients to these “offices”.

In a few weeks I will start outlining how to live with the ACA. Oh, joy!