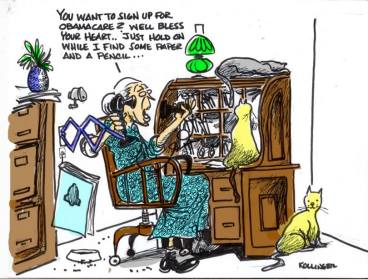 There are potential complications that await consumers as President Barack Obama’s health care law approaches its second open enrollment season, just two months away. We don’t expect a repeat of last year’s website meltdown, but the new sign-up period could expose underlying problems with the law itself that are less easily fixed than a computer system. Getting those who signed up this year enrolled again for 2015 won’t be as easy as it might seem. And the law’s interaction between insurance and taxes looks like a sure-fire formula for confusion.

As an example the roughly 8 million people who signed up this year, the administration has set up automatic renewal. But consumers who go that route may regret it. They risk sticker shock by missing out on lower-premium options. and they could get stuck with an outdated and possibly incorrect government subsidy. An additional 5 million people or so will also be signing up for the first time on HealthCare.gov and state exchange websites. But the Nov. 15-Feb. 15 open enrollment season will be half as long the 2013-2014 sign-up period, and it overlaps with the holiday season. The concern is that the government is trying to get more people through the system without shortchanging education, so that consumers know how to use the insurance they’re enrolling in. Does this make any sense?

Of those enrolled this year, the overwhelming majority received tax credits to help pay their premiums. Because those subsidies are tied to income, those 6.7 million consumers will have to file new forms with their 2014 tax returns to prove they got the right amount. The problem is that too much subsidy and their tax refunds will be reduced. Whereas too little, and the government owes them. Tens of millions of people who remained uninsured this year face tax penalties for the first time, unless they can secure an exemption.

“It’s the second open enrollment, but the first renewal and the first tax season where the requirements of the Affordable Care Act are in place,” said Judy Solomon, vice president for health policy at the Center on Budget and Policy Priorities, which advocates for low-income people, and supports the law.

At Foundation Communities, an Austin, Texas, nonprofit serving low-income people, Elizabeth Colvin says more volunteers will be needed this year to help new customers as well as those re-enrolling. Last time, her organization’s health insurance campaign lined up 100 volunteers. She figures she will need a minimum of 50 more.

Some congressional supporters of the law are worried about more political fallout, particularly because of the law’s convoluted connections with the tax system.

“It seems to me there ought to be some way to better educate folks on what they may face in this process,” Rep. Mike Thompson, D-Calif., told Internal Revenue Service Commissioner John Koskinen at a Congressional hearing.

Thompson wasn’t impressed when Koskinen said the IRS has put information on its website and is using social media to get out the word.

Rep. Bill Pascrell, D-N.J., said in an interview that he disagrees with making people pay back part of their premium subsidy. That would happen if someone made more money during the year and failed to report it to HealthCare.gov.

“Why should individuals be punished if they got a bump in salary?” said Pascrell. “To me, this was not the ACA I voted on.”

Last year the federal website that serves most states crashed the day it went live, and it took the better part of two months to get things working reasonably well. This year, the Obama administration is promising a better consumer experience, but officials have released few details. It’s unclear how well system tests are going.

“This coming year will be one of visible and continued improvement, but not perfection,” said Andy Slavitt, a tech executive brought in by the Department of Health and Human Services to oversee the operation.

Insurers say they continue to worry about connections not fully straightened out between their computer systems and the government’s.

They also are concerned about retaining customers. One quirk troubling the industry is that policyholders who want to update their subsidies and stay in the same plan will have to type in a 14-character plan identifier when they re-enroll online. That’s longer than a phone number or a Social Security number, and customers may not know where to find it.

Administration spokesman Aaron Albright says consumers will have several ways to do that. The number will be mailed to them by their insurer as part of their renewal notice, they can get it from a HealthCare.gov call center or they can select the same plan while browsing other options online.

Alex Stevens, a dishwasher at an Austin pizzeria, got covered this year and said he’s planning to re-enroll. A skateboarding enthusiast in his late 20s, Stevens broke a leg skating with friends this summer. It was a bad break and he had major surgery the next day.  But his insurance paid most of the $55,000 bill, and he only owed $750.

“My mom said she was glad that I have insurance,” said Stevens.

As the share of Americans remaining uninsured declines, it’s clear the health care law has filled a need for millions of people like Stevens, who work but don’t have coverage on the job.

That demand was strong enough to overcome a dysfunctional website the first year of the coverage expansion. The second year will show whether the full program is workable for the people it was intended to serve, or if major retooling will be needed.
Other aspects that may be a problem:

When will the IRS follow through with penalties for non-participation in the health care system?