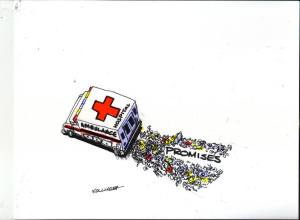 Our present system of healthcare can be described as “sick care.” But this has and will continue to be the most expensive way of caring for our nation’s population. U.S. health care costs currently exceed 17% of GDP and continue to rise. Other countries spend less of their GDP on health care but have the same increasing trend. Explanations are not hard to find. The aging of populations and the development of new treatments are behind some of the increase. Perverse incentives also contribute: Third-party payors (insurance companies and governments) reimburse for procedures performed rather than outcomes achieved, and patients bear little responsibility for the cost of the health care services they demand.

As Stephen Schimpff stated in his book (The Future of Health Care Delivery) “we Americans like to pride ourselves on having the best health care system in the world, but unfortunately that is not the case. We have a medical (that is, sick) care system—a system that waits until we become ill before it kicks into action—instead of a health care system focused on helping us stay healthy. We give lip service to prevention and, depending on your definition, spend only about 1–3 percent of our $2 trillion in medical expenditures on public health.”

By many measures we do not rate favorably when compared to other industrialized societies. Our behavior and lifestyle make us prone to illnesses that are chronic, complex, lifelong, and life shortening, all of which make them very expensive to treat. That $2 trillion is by far more than other nations spend on a per capita basis. We spend almost $8,000 per person per year, about 50 percent more than the next closest developed country, and this expenditure is seriously and adversely affecting businesses, government, and each of us. If benefits including medical insurance are high, then wages will be correspondingly lower. It is a zero-sum game. The government cannot afford what it has promised, either: witness the current debate in Congress regarding the costs of Medicare. And each of us complains bitterly that the cost of care is too high—and that we cannot do anything about it.

Meanwhile, we may be pleased with our doctor but not with the health care delivery system as a whole. Quality is subpar, preventable errors are rampant, and some 47 million Americans are without insurance or access to medical care.

But few acknowledge a more fundamental source of escalating costs: the system by which those costs are measured. To put it bluntly, there is an almost complete lack of understanding of how much it costs to deliver patient care, much less how those costs compare with the outcomes achieved. Instead of focusing on the costs of treating individual patients with specific medical conditions over their full cycle of care, providers aggregate and analyze costs at the specialty or service department level.

Making matters worse, participants in the health care system do not even agree on what they mean by costs. When politicians and policy makers talk about cost reduction and “bending the cost curve,” they are typically referring to how much the government or insurers pay to providers—not to the costs incurred by providers to deliver health care services. Cutting payor reimbursement does reduce the bill paid by insurers and lowers providers’ revenues, but it does nothing to reduce the actual costs of delivering care. Providers share in this confusion. They often allocate their costs to procedures, departments, and services based not on the actual resources used to deliver care but on how much they are reimbursed. But reimbursement itself is based on arbitrary and inaccurate assumptions about the intensity of care. But again, this about treating the sick! In a 2002 study by the Institute of Medicine as evidence that there remain severe inefficiencies in the healthcare system. The study found that 31% of healthcare spending in the country is wasted, including $210 billion a year on unnecessary procedures, which is more than you need to cover all the uninsured in a year.

Also, most patients feel as if they do not get to spend enough time with their physicians. Remember from one of my former posts that from the physician’s perspective, he or she feels that there is not enough time to spend with an individual patient, not enough time to learn about the family and the environment in which that patient lives and therefore in which the patient’s disease has occurred, and not enough time to focus on preventive instructions or to even talk fully about the plan for caring for a specific illness or problem. Instead, too much time is spent following mandates and filling out forms, often repeatedly; and then they are being paid well less than what their time and effort were worth.

Instead we should be developing a “Well Care” system, a system of caring for the people of the US. The proper goal for any health care delivery system is to improve the value delivered to patients. Value in health care is measured in terms of the patient outcomes achieved per dollar expended. It is not the number of different services provided or the volume of services delivered that matters but the value. More care and more expensive care is not necessarily better care.

In the next few weeks I am going to propose and outline a system of “Well Care”, which is a change in both provider and patient behavior and the only way the healthcare system will survive as an affordable care program.

Do you, the readers and participants in the healthcare system have any suggestions?