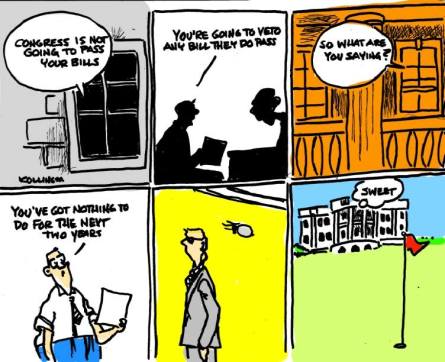 As reported in the Capital Attitude, Congressional Republicans are unveiling what they say is a new plan to repeal and replace ObamaCare, the Affordable Care Act/ACA, but the ‘blueprint,’ as they call it, looks an awful lot like what’s been floated before.

The first bicameral proposal of the 114th Congress calls for the outright repeal of President Obama’s signature health care law, and with that, the individual mandate to buy insurance or pay a fine.

It provides for targeted tax credits to individuals and families up to 300 percent above the poverty line to encourage people to buy plans in the market place.

It also allows insurers to sell plans across state lines and caps the amount of monetary damages that can be awarded in medical malpractice litigation.

Like the Affordable Care Act, dependents are able to stay on their parents’ healthcare plans until they’re 26, and no one can be denied coverage for pre-existing conditions — although this plan calls for a specific ‘continuous coverage’ protection where individuals moving from one plan to another cannot be denied.

To pay for it, Burr, Hatch and Upton propose taxing the value of health insurance plans above $30,000 a year as regular income.

If these proposals sound familiar it’s because most of them are. Many are based on an outline pitched last year by Burr, Hatch, and former Sen. Tom Coburn, R-Okla.

An aide familiar with the plan said one of the reasons there are no massive changes is they thought they had a decent product last year based on feedback they’ve gotten. But do they?????

Even if it’s viable don’t expect a vote — in either chamber — anytime soon. Aides are very quick to point out that this should not be hailed as the “GOP Plan.”

It’s just one plan, as one adviser put it, and more input from governors and legislators will be needed before anything moves forward. Even hearings haven’t yet been discussed.

The Democrats responded stating that the plan by three Republican lawmakers for replacing President Barack Obama’s health care overhaul would leave Americans with less coverage and higher costs than the landmark law they want to repeal, Democrats said Thursday.

It effectively raises taxes on the middle class, removes bedrock protections for consumers and chips away at key coverage benefits that Americans rely on,” Sen. Ron Wyden of Oregon, top Democrat on the Senate Finance Committee, said a day after the GOP authors released their outline.

“Republicans are trying to put politics first, put power back in the hands of insurance companies rather than patients,” said Washington Sen. Patty Murray, leading Democrat on the Senate Health, Education, Labor and Pensions Committee.

Democrats have lambasted Republicans for promising to repeal and replace the health care overhaul virtually since its 2010 enactment yet failing to advance a substitute. Republicans face growing pressure to suggest a replacement plan because 19 million Americans will be covered under Obama’s law this year, the nonpartisan Congressional Budget Office estimates.

The plan, not yet in legislative language, erases the existing law’s coverage requirements for individuals and employers. It eliminates the state and HealthCare.gov federal insurance marketplaces where insurance can be purchased and abolishes taxes the law imposes on medical devices and other things.

The GOP relies largely on tax credits and greater flexibility for insurers and states to provide coverage.

People at firms with 100 or fewer employees could get tax credits, as would people earning up to triple the federal poverty level. That would mean individuals earning up to approximately $35,000, and larger amounts for families, would qualify.

Democrats say that would increase taxes because the GOP plan proposes a lower threshold than current law, which allows federal subsidies for individuals earning up to around $47,000, more for families.

People “would no longer be subject to an individual mandate and limited to Washington-approved plans,” they wrote.

Translating the principles into a bill could be time-consuming, postponing the political vulnerability possible when ideas become detailed legislation.

GOP aides said there were no official estimates of cost or the numbers of people their plan would cover. They said they believed their plan would save money and be competitive with coverage under Obama’s program.

The GOP plan would eliminate Obama’s expansion of Medicaid, the federal-state health insurance program for the poor. Instead, states would be given more freedom to decide how to spend the money.

As under Obama’s law, insurers would be required to include children up to age 26 under their families’ policies, though states could ignore that. Unlike Obama’s requirement for maternity coverage, states could choose not to do so.

There would be no lifetime limits on coverage, as with current law.

People with pre-existing medical conditions could not be turned down for insurance. But for many who had a gap in coverage exceeding roughly two months, insurers could charge them more for a policy, congressional aides said.

The GOP plan would tax the value of employer-provided health coverage exceeding $12,000 for individuals and $30,000 for families, amounts that would grow as inflation rises.

There currently is a case about to come before the Supreme Court challenging ObamaCare’s subsidies for private insurance for people who don’t have access to it through their jobs. If that provision is struck down, millions of consumers could drop coverage.

A larger bill, still, will almost certainly wait until there is a new occupant in the White House.

One aide said, as the president is not repealing his bill, Republicans are putting together a credible plan – and preparing for 2017. But, with the GOP in such disarray, disorganization, should they be confident in their assurance that they could win the highest office, especially with Hillary in the wings?

What should the GOP be doing? Don’t waste their time repealing a law, which they know will be vetoed!

Instead take the better road and develop a team to truly research and develop a health care plan, that will cover all, administer health care fairly and effectively and one that is sustainable. We need a Team that is not politically motivated and is bipartisan or better nonpartisan. We need a TEAM that is designed with the voters, oh and yes, the best interests of the patients and insurance premium payers. Unique idea I know, but one that has to be considered. We need to motivate the insurance companies and lawyers to mind their manners or else they will be penalized. Heck, we continue to penalize the physicians and the patients. Maybe we should change and identify the true criminals! Both of these groups need to be regulated in order for a health care system to function for the patient, the health care worker and the facilities that deliver the care that we all need.

We also need to educate the public about the true pros and cons of the ACA and how to develop a better system. Consider the survey poll.

Last thought, vaccinations, do they cause autism? Of course not! But the Internet information, coming from all sorts of notables, authorities that depend on their actress or actor status, try to connect vaccinations to autism and all sorts of other conditions. Remember, the only paper, study that drew a connection of vaccinations to autism back in 2002 was debunked in 2010, found to be without merit and the physician lost his license to practice medicine. But the Internet allows any one to be a believable reference or authority, even though they don’t use any credible research studies. How bizzare!

Now on to the topic I have been attempting to research and develop, but have been delayed due to other “distractions”. Let’s look at how we approach a better health care delivery system.