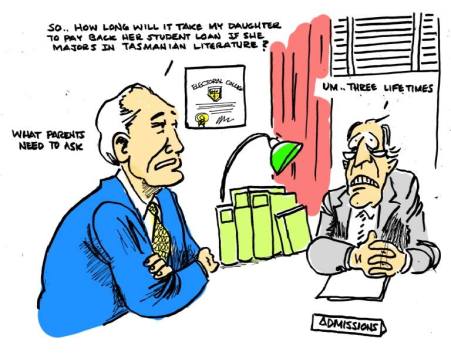 I was al set to begin our journey through time looking at the history of healthcare and the insurance industry in this wonderful country when I came across this newsworthy note. Remembering that the President is very proud of the fact, that in the Affordable Care Act (ACA) children have continued health care insurance coverage on their parents’ policies up to and including the age of 26.

‘‘(b) REGULATIONS.—The Secretary shall promulgate regulations to define the dependents to which coverage shall be made available under subsection (a).

‘‘(c) RULE OF CONSTRUCTION.—Nothing in this section shall be construed to modify the definition of ‘dependent’ as used in the Internal Revenue Code of 1986 with respect to the tax treatment of the cost of coverage.

So, now we learn that students at vaunted Cornell University are plenty smart enough to know they should not have to pay a penalty for not buying the school’s health insurance if they already have coverage, but that’s exactly what a new policy at the Ivy League school requires.

The $350 “health fee” for opting out of the school’s insurance plan was announced in a memo school President David Skorton posted on Cornell’s website last week, according to higher education blog The College Fix. But it is just setting in with the student body, and many attending the Ithaca, N.Y., school are not pleased. Under the Affordable Care Act, students must have insurance, but making those already covered pay an extra fee to skip the school’s plan is not sitting well. Don’t the parents and students pay enough already?

“Effective next academic year, 2015-16, we will be introducing a student health fee for those not enrolled in the Cornell Student Health Insurance Plan (SHIP),” read the memo. “As a physician, parent and president, I am proud of our university’s long history of providing quality medical, mental health, education and prevention services on campus. These essential services play a critical role in student well-being and, therefore, success. Yet funding these services — and creating access to them for all students — has been a growing fiscal challenge, and a personal concern of mine.”

The announcement sent students into a fervor, leading to a series of rallies on campus and hashtag activism, with #FightTheFee trending on the social media website.

Why do these, and most students, have to pay a penalty for having insurance under the ACA? This seems idiotic and counterproductive, except for the fact that this Ivy League school can charge another fee and get away with it. As I have already stated and questioned, don’t the parents and students pay enough for tuition and other fees?

So, where did this healthcare system go wrong? Back when our family doctors and general practitioners were in practice patients were seen and treated for whatever the families could afford. Most fees were reasonable. Negotiations were reasonable were considerate of cost to the physician and the families.

As the Harvard Business School professor, Michael Porter stated, the problems with the U.S. health care system are not the result of inattention, rather on misdiagnosis of the problem. With the wrong diagnosis, the attempts to treat the problems and ills address the wrong issues or offer piecemeal or ineffective solutions. I believe that greed is the root cause of the whole problem. All of a sudden industry entrepreneurs found out that they could make big bucks. Insurance companies wanted bigger and bigger profits and charged higher premiums while discounting the services of the treating health care physicians as well as the hospitals.

Lawyers found out that they could make the big bucks by suing the health care system for any issue that could bring a lawsuit to court, realizing that insurance companies would wan to reduce their loses by settling out of court.

The demand for medical care and the demand for health insurance need to be considered together. People dislike risk and the insurance industry profits by supplying insurance of many types as evidence of this dislike. People often, and willingly pay insurance companies far more than the average loss that they would confront in order to eliminate the chance of really large risky losses. Risk aversion is the reason that insurance companies and malpractice attorneys make such huge profits. These attractive high profits in the insurance industry and tort law attorneys push the cost of delivering health care to out of sight totals.

The real problem with the ACA is that there has been no attempt at controlling these costs. In fact the insurance companies have been assured that their losses will be compensated by the governmentally controlled system and there is no attempt at even considering tort reform.

We will discuss these aspects in more detail as the weeks go by and we research the history of the healthcare and insurance industries. Is it better to have a single payer system as in Europe or is our direction in this country the best iotion?

As a continued discussion of the problems of the GOP goal to repeal Obamacare., I pose the same question that Ezra Klein asked-where is the Republican alternative to Obamacare?

Four years after the GOP began vowing to repeal the healthcare program, the party still can’t agree on how to fix it or replace it. Why? Philip Klein points out in his book, Overcoming Obamacare, that all replacements are “considering the Left’s premises” that the government should expand access to health care and help people pay for it.

The result is that various proposed alternatives are all “Obamacare-Lite.” The other problem is that the replacement programs would cause another massive upheaval in the health care industry with lots of trades offs and unpopular substitutes. The other question is do the Republicans really want to be responsible for raising premiums on older people or people with pre-existing conditions? The thought of the Conservatives just junking the ACA altogether and arguing that it’s not society’s problem that tens of millions of people go without health insurance is not a pretty option. I don’t think that no matter who runs or wins the White House in 2016 will ever let that happen.