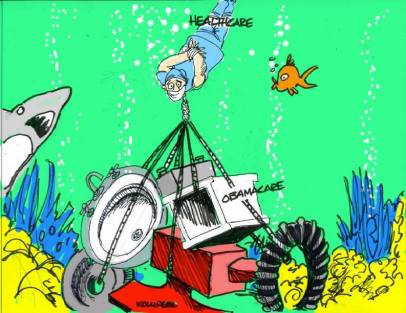 As I listen to the GOP candidates voice their repeated threats of repealing the Affordable Care Act and the alternatives including health savings accounts I wondered whether these alternatives were viable.

The main problem with the concept of health savings accounts is that the participants must “work” to make the system work. They must set up these accounts and realize that there are limitations to the participation in the “program”. Also, to make the program advantageous to the patient investor the member should be investing in the Account.

Interestingly, this seems not to be the case. A number of reports have pointed out that only a tiny fraction of the growing number of people with health savings accounts invests the money in their accounts in the financial markets, a recent study finds. The vast majority leaves their contributions in savings accounts instead where the money may earn lower returns.

People who have had their health savings accounts open longer are more likely to invest their contributions, suggesting that there’s a learning curve in grasping how the accounts work and how to use them, says Paul Fronstin, director of the Health Research and Education Program at the Employee Benefit Research Institute and the study’s author.

Since they were introduced in 2004, health savings accounts have offered people with high-deductible health plans that meet certain criteria a way to set aside money tax-free to cover medical expenses. HSA contributions are deposited pretax, grow tax-free and aren’t taxed when distributed if they’re used for qualified medical expenses.

Because of the tax advantages, saving for health care expense in retirement using an HSA may be a better option than using a 401(k) or other retirement savings account for that purpose, say advocates. If an HSA is offered through an employer, both the employer and employee can contribute to the accounts, and the money belongs to the individual if he leaves his job.

This year, plans that link to HSAs must have a deductible of at least $1,300 for single coverage and $2,600 for family coverage, among other requirements.

Yet few consumers are taking advantage of the investment options.

The study didn’t explore why consumers made their HSA choices. However, Fronstin says that in addition to being unfamiliar with how health savings accounts can be used, there may be other roadblocks that discourage people from investing their HSA contributions.

And even though people can liquidate their investments at any time generally without penalty, “people may not want to tie up their HSA money in an investment account when they may need it to cover a medical expense,” says Fronstin.

Fronstin is planning to do research to determine how many people use their health savings accounts primarily as an investment or retirement savings vehicle rather than for current medical expenses.

So, with these basic requirements and more how do you convince the low-income members of our society., the non compliant members or as Mr. Gruber labeled much of society, the stupid members of society. Remember these stupid people were the reason why the Accountable Care Act was passed. The question is how do you make a system based on HAS’s work then???

I’m not sure that in our present society and the government that we live under that this is a real possibility, although I can see a very real advantage to this system. We would all benefit. I really admire and support Dr. Ben Carson for his ideas regarding health care and the policy and plan that he promotes. Unfortunately, our society of being entitled and getting it all for nothing as well as the prevalent poor work ethic will not support this as a sustainable health care system. In will become a two level system where those that have more money will benefit from concierge practices and the rest of us will suffer long waiting times, restriction of care and higher taxes or new taxes….

My thoughts as I continue to research and see the affects of the ACA is that we are going to be under a single payer system for health care delivery whether we want it or not and no matter who is our next President.

Just look at the results of the complaints regarding the Veterans health care delivery, the long waiting times and lack of delivery of care. Has anything really been done. As the recent reports have shown.

Consider that recent article in the Washington Post today-“Veterans battle bureaucracy for the basics of health care” written by Emily Wax-Thibodeaux. The article points out that even though the Armed Forces system promotes women in the military, even now pushing woman to the front line as combatants, there is much to be desired regarding the way the Veteran’s health care system treats woman. The example was a retired Army Sgt, who was given by the Department of Veterans Affairs a “man’s” prosthesis after her leg was amputated in 2013. The problem was that the prosthesis was so bulky and ill fitting that it kept falling off in public. She pleaded with the VA officials for a “ a foot that fits a female foot,” only to be told repeatedly that the agency doesn’t carry that kind of customized prostheses, which is available on the private market.

“I jus wanted to get this man’s foot off of me,” she said. “Does it really have to be this hard for female veterans to get the right kind of care?”

U.S. women are streaming home from war and through VA doors in record numbers. But the health care system with all the problems that have been suffering with all the problems and that for generations has catered and still do cater almost exclusively to men has been slow to recognize that the 2.3 million female veterans represent the fastest-growing population turning to the VA in mired ways.

VA hospitals and clinics don’t offer prenatal care; instead they outsource it. And they don’t deliver babies. Dozens of VA facilities don’t have full-time gynecological staff. Even for basic female wellness services, such as mammograms, some facilities have to refer women elsewhere.

We have all been aware of the severe shortage of all physicians in the VA system as described as one of the reasons for the waiting times, although the other issues of improprieties have overwhelmed us and pushed the lack of clinician problem into the background. There is a severe shortage of VA mental health therapists who are women, an especially pressing problem for female veterans trying to come to terms with sexual assaults suffered in the military.

While some VA hospitals have premier women’s clinics, others offer women little privacy, forcing them to share rooms with men and separating them in most with a curtain. Even recently, as VA Secretary Robert McDonald has acknowledged, some hospitals didn’t have separate restrooms for women…. Unbelievable!!!!

U.S. fighting forces have experienced a revolution over the last generation. Once barred from combat situations, women have piloted aircraft over the mountains of Afghanistan and patrolled rural villages of Iraq alongside male troops and recently have had a group graduate from Ranger school training.

But when the women return from overseas, they often discover that the VA and the wider American society haven’t changed as quickly as the military and that they face difficulties not experienced by their male counterparts. They confront challenges not only in finding suitable health care but also in reintegrating into society, finding jobs, homes and love, and reconciling the identity as both a women and a warrior.

“The problem is we are coming home to a society and, unfortunately, a VA that still defines veterans as male- that’s what Americans picture when they think “veteran”” said a former Army medic Joy Ilem, who focuses on VA’s women’s health care policy for the advocacy group Disabled American Veterans (DAV).

To know which way the general reform winds are blowing at the Department of Veterans Affairs, one should, as ever, follow the money.

In other words, back into an immutable, reform-resistant behemoth. The status quo is a powerful force within this organization. It fights unceasingly against change. And it has allies, including the White House.

The recommendations we presented — a drastic reduction in the size and focus of the organization and a renewed emphasis on the VA’s strengths in medical treatment of post-traumatic stress disorder, concussions and physical war wounds — are necessary to refocus the VA from a sprawling federal agency dedicated to serving its own perceived needs to one more responsive to veterans.

The initial reaction between the VA’s traditional advocates, within the agency and without, was not enthusiastic. In some quarters, it was outright hostile. No surprise there.

The passion for change is growing, however. One of the strongest voices for VA reform among veterans has been Concerned Veterans for America, a conservative, free-market-oriented organization of veterans.

The CVA unveiled Thursday a serious proposal for VA hospital reform dedicated to the principle of putting veterans, rather than the VA, in charge of the veteran’s health care.

The group’s recommendations take up several of the ideas put forth last summer by The Republic. They would refocus the VA hospital system to what it does best, notably attending to the needs of vets with service-related disabilities and ailments.

The CVA plan would give vets a choice: continue using VA health-care services as your primary source of care, or use VA-sponsored health insurance to seek care in the private sector. Effectively, the plan would split the VA into two entities, one that directly provides health care to vets, and the other a payer of insurance premiums and claims.

It makes sense, and here’s an example of why:

One of the more prominent weaknesses at the Phoenix VA hospital has been its inability to properly staff the urology department, a

specialty in which there is no shortage of doctors in the private sector. Instead of having veterans wait on an inefficient, duplicative federal bureaucracy, the CVA proposal would empower veterans to quickly get the health care they need.

And it would remove the temptation for VA leaders to cook the books.

The VA scandal first reported by The Republic in late 2013 involved deceitful double booking of patients, some of whom waited months before their initial visit with a VA doctor.

It was a sweeping, reputation-shattering drama that rocked an institution many advocates had held up as a model of centralized, government-directed medical service.

It was, however, just the latest of a series of periodic patient-care scandals that have marked the VA’s history since its modern-day inception following World War I.

Without serious reform that reconfigures the VA health system’s mission to one that focuses on the veteran rather than the institution, these cyclical scandals will continue.

The reforms proposed by the CVA may not be the final answer. Even the policy analysts who drafted the proposal admit as much.

But it is a guide to real reform, as opposed to throwing money at the problems of the VA, and then taking it back and we have to consider the special needs of our female veterans if we are going to support sending them into combat or even as support for the rest of our troops.