My goal starting tonight was to continue our discussion of other health care systems starting with Norway, which I thought was a great system until I delved deeper into some of the problems, looking at the non so greener side of the other countries’ systems. However, after reading reports of college and university students calling for the resignation of the administrators for not doing enough to make them feel comfortable and calling for “safe zones” I ran across this article in the NPR news reports. In the wake of the Paris attacks, a majority of young Americans support sending U.S. ground troops to fight ISIS, according to a wide-ranging new poll from the Harvard Institute of Politics.

The institute has asked millennials about the idea of American boots on the ground at three different times this year, and the survey results have fluctuated somewhat, but there seems to be a “hardening of support.”

In this most recent survey, 60 percent of the 18- to 29-year-olds polled say they support committing U.S. combat troops to fight ISIS. But an almost equal number (62 percent) say they wouldn’t want to personally join the fight, even if the U.S. needed additional troops.

The disconnect in joining the fight comes down to how millennials feel about the government writ large, according to Harvard IOP Polling Director John Della Volpe.

“I’m reminded of the significant degree of distrust that this generation has about all things related to government,” said Della Volpe. “And I believe if young people had a better relationship with government … they’d be more open to serving.”

Della Volpe does caution, though, that this poll doesn’t dig into the size or the scope of the military campaign that young folks would be willing to theoretically support.

How stressful is medical training? So bad that in a class that encouraged medical students to express their feelings by drawing comics, nearly half of them depicted their supervisors as monsters, researchers say. 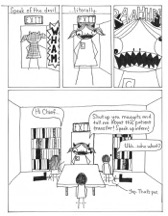 That study, by researchers from several leading medical schools, including Harvard, Yale and Cambridge in England, adds to a body of work showing that the stress of training can cause depression.

Over a lifetime the depression rate for doctors is similar to the general population, about 10 to 13 percent in male physicians and 20 percent in females, compared with 16 percent overall. according to an editorial written by Dr. Thomas Schwenk, dean of the Unviersity of Nevada Medical School. So it looks like the number of doctors affected during their residencies is significantly higher.

And it’s not just the doctors themselves who suffer — patients should worry, too. Depression in residents “has been linked to poor-quality patient care and increased medical errors,” the researchers note.

The two reports demonstrate that something is wrong with the medical training system, according to Schwenk. “The profession purportedly recognizes the importance of health and wellness,” he wrote, “but the value system of the current training environment makes clear to residents the unacceptability of staying home when ill, of asking for coverage when a child or parent is in need, and in expressing vulnerability in the face of overwhelming emotional and physical demands.”

A big part of the problem is that medicine has long been taught by treating underlings harshly, which has been considered acceptable because a mistake could cost a patient her life.

“People treat people like they were treated,” said Green, a physician and professor of internal medicine at Penn State, in an interview. ” ‘This is how I did it and I’m OK, so I’m going to do it to you and you’ll be OK.’ ”

But medicine itself has changed, Schwenk said in an interview, and that compounds the problem. “My era [the 1970s] came away with very strong role models and people who were incredibly influential,” he said. “Today everyone is so frantic,” with patients moving in and out of hospitals faster and strict protocols for patient care. That leaves little time or space for more benevolent types of supervision and teaching for doctors in training.

Schwenk says it’s time for the pendulum to swing back toward more personalized training after medical school. “There’s got to be a shift back toward dedicated teaching and mentorship,” he said. “We’ve lost that because of the craziness of the system.”

Doctors who train other doctors also need to practice what they preach, he says. “We don’t teach in ways that encourage wellness and good mental health and coping mechanisms.”

Green says the system needs to stop the abuse of medical students and residents by professional superiors.

“There has to be a message that this is not OK and there will be consequences for treating people badly,” he said.

Both doctors said they hope that bringing more visibility to the problem could help lead to needed changes. Said Green: “My hope is it’s getting better because we’re much more sensitized to these issues.”

What a load of garbage!!

Students need safe zones and need to be coddled?

Wait until they get a touch of the real world where there are no “safe zones” and patients and administrators attack you and abuse you as care givers. I can’t wait to see what you strategies are next. Quit? Complain to your lawyer or Mommy?

As in colleges and now in medical schools, if you don’t like what is needed in the training programs, do something else, try a different university or different vocation.

The coping mechanisms are needed as to the abuse that you will get as physicians and we will discuss that in a future post. As the health care climate becomes more and more frustrating to all including the physicians and the patients, the abuse only increases by many magnitudes.

You have to put on our adult sneakers and pants dear students and learn how to cope!

And if you don’t like the experience go into library science, philosophy, psychology, etc.

On to look at other health care systems.

Happy Hanukkah to all my Jewish friends. This is your Mensch speaking.