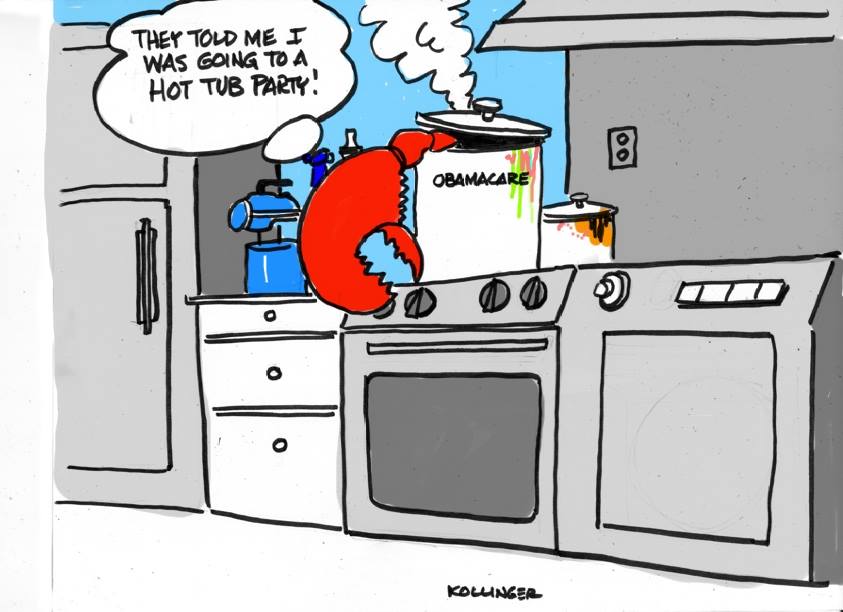 News editor Joyce Frieden reported on Monday the release of the Congressional Budget Office (CBO) estimate of the economic and insurance impact of the Republicans’ Affordable Care Act (ACA) replacement plan shined a spotlight on a little-known government agency.

The CBO was established in 1974 during the term of President Richard Nixon, explained Philip Joyce, PhD, MPA, professor of public policy at the University of Maryland, in College Park, and the author of “The Congressional Budget Office: Honest Numbers, Power, and Policymaking.”

CBO’s creation was “part of an attempt by Congress to try to strengthen role of Congress vìs-a-vìs the president in budget process, and it came directly in response to President Nixon, who was not known for his desire to share power,” Joyce said in a phone interview. “This bill was literally the last bill Nixon signed before he resigned from office.”

People have asked why any president in his right mind would sign such a piece of legislation, since it’s clear it would weaken the strength of the presidency and strengthen Congress’s hand in budget matters, Joyce said, “but Nixon felt he needed all the friends he could get and that he had no choice but to sign the legislation.”

A Non-Partisan Information Source “The idea behind the CBO was to provide non partisan, objective information to Congress on exactly this type of thing — the cost of a piece of legislation so Congress knows what it’s dealing with before it votes on something,” he explained. “Prior to the creation of the CBO, the estimate would come from the president’s Office of Management and Budget” and could be colored by whether or not the president liked a particular bill.

Just so, agreed Virginia Commonwealth University health policy expert Andrew Barnes, PhD, who said in his experience the CBO lived up to that “fair and balanced” goal. “I believe that health policy experts and health economists, and indeed Congress, view the CBO scoring of bills as valuable, trusted, and credible source of critical information on which to make evidenced-based policy decisions,” Barnes wrote in an email.

The CBO’s scoring of the GOP’s American Health Care Act seems “perfectly logical to me,” said Joyce. “What CBO found is [basically] that this is going to save a fair amount of money — $337 billion over 10 years — and it’s going to mean a lot of people who would have health insurance now, won’t have health insurance after the bill passes. It makes government smaller by guaranteeing that fewer people have government-sponsored or government-provided health insurance. That to me is the bottom line.”

That assessment was echoed by Emory University’s David Howard, PhD, who added, “It is hard to imagine other groups developing better predictions than the CBO.” However, he added, “As was the case with the ACA in 2010, the changes currently being contemplated are unprecedented. In statistics parlance, the CBO is making an ‘out of sample’ prediction.”

Estimate is “In the Ballpark” Despite its commitment to taking fair and balanced assessments, the CBO can be off the mark — sometimes far off the mark and one of those cases was in its estimates for the Affordable Care Act, noted Joshua Sharfstein, MD, professor of health policy at the Johns Hopkins University Bloomberg School of Public Health.

The CBO works to develop ballpark estimates, but sometimes the foul pole is moved, which explains a bit of how the CBO went off the tracks with its ACA scoring. Sharfstein pointed out that “the CBO didn’t realize the Supreme Court would [make] the Medicaid expansion [not mandatory]. You can’t predict the future with certainty, but most people respect that the CBO will do a very serious job.”

The CBO significantly overestimated the number of people who would gain coverage under the ACA, but it wasn’t alone in making that mistake. “There was a Commonwealth Fund study that evaluated CBO and the other people who had looked at the ACA and what they found was basically nobody … got very close to what actually occurred, but that CBO — relative to others who had analyzed this — got closer to the mark,” said Joyce.

A health management professor from the University of Pennsylvania’s Wharton School sounded a more cautious note about this latest CBO report. “Estimates of the number becoming uninsured seem on the high side to me; they are highly dependent on how states respond to changes in Medicaid financing, which ought to have less of an effect on the number with coverage and more of an effect on generosity of coverage,” Mark Pauly, PhD wrote in an email. “But they are plausible and reflect the Administration’s policy decision to reduce federal spending on government health insurance, which will cause some people to choose not to take insurance coverage because it has become more costly for them.”

Has the CBO’s report served its intended purpose of shining a non-partisan light on the Republican proposal? “I think we don’t know yet,” said Ms. Frieden. “Its purpose is just to try to illuminate the debate. One of the challenges in this case is that, unless I’ve missed something, there is no alternate estimate out there” from the Trump administration for the two sides to discuss.

“The only thing I’ve seen in response to the CBO report is [Health and Human Services] Secretary [Tom] Price saying, well, he just doesn’t believe it. ‘I just don’t believe it’ is different than saying, ‘Well, the CBO says that by 2026, this means 24 million people who would’ve had insurance under the ACA would not have insurance, but we believe the number is X, and here’s how we get there,'” he said.

If there are serious arguments on the other side, “people should propose legislation now and have it modeled by CBO,” said Sharfstein. “I think we’re past the point of ‘Trust us, it will all be great.'” The CBO did what it was supposed to given its limited mandate, Gerald Kominski, PhD, professor of health policy and management at the University of California Los Angeles, said in an email. “The fact that the [proposal] would reduce the deficit by $337 billion over a decade completely ignores the impact on state and local government budgets, not to mention the impact on 24 million uninsured Americans in terms of their out-of-pocket costs and their health deficits. But that’s not CBO’s job, and this report is in keeping with CBO’s scope of responsibility.”

These 5 Charts That Explain The CBO Report On The Republican Health Plan                 The Republican health care bill would not affect Americans equally. Older, poorer people would see big reductions in coverage and cost increases, according to a report from the nonpartisan Congressional Budget Office. This first step in the GOP plan to repeal and replace the Affordable Care Act, also known as Obamacare, would also create a modest deficit reduction.

The report hands Democrats more ammunition in attacking the bill, while Republicans are divided: Some are playing defense, while others are backing away, and some are also proposing changes. To see the potential impact of the bill as it stands, here are five charts, based on the CBO analysis.

First things first: The Republican health care bill would greatly ramp up the number of people who are uninsured. Currently, around 9.5 percent of Americans younger than 65 are uninsured. Under the Republican bill, the uninsured rate in 2026 would be nearly double that, at 18.6 percent, compared with 10 percent under the Affordable Care Act. 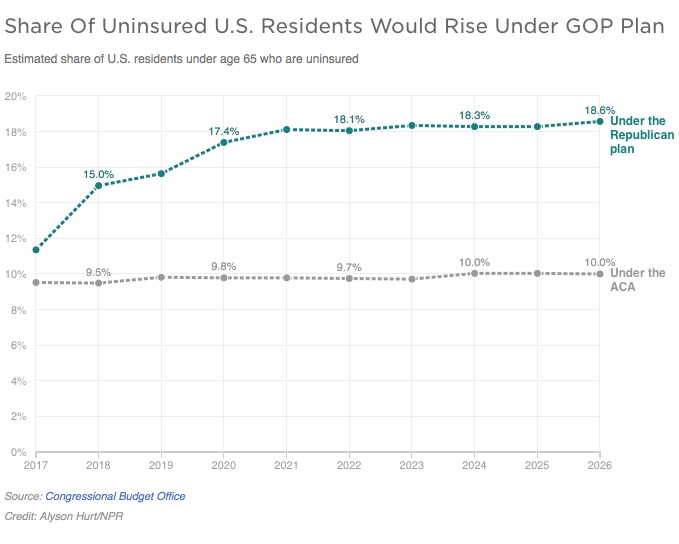 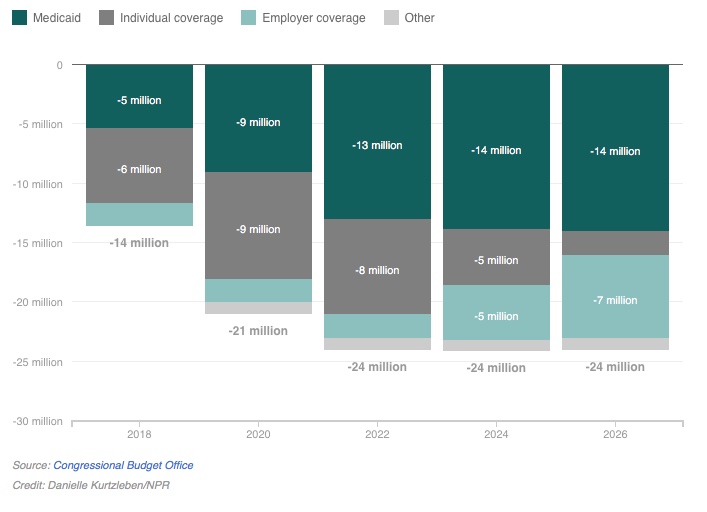 That big upswing in 2018 would be largely attributed to repealing the penalties that came as part of the individual mandate — not having a fine would lead lots of people to decide not to get insured. In addition, rising premiums would deter some from buying insurance.

In subsequent years, Medicaid changes would account for an increasing number of uninsured, eventually hitting 14 million. The rollback of the Affordable Care Act’s Medicaid expansion would begin in 2020, cutting the number of people on the program. In addition, no states would be able to take up the expansion in the future, further dropping the number of potential Medicaid enrollees.

Premiums go up, then down (but not for everyone)

The CBO’s report shows that premiums in the individual insurance market would increase first, then decrease, ending up 10 percent lower than they would be under the current law in 2026. That’s because young and healthy people would likely drop out early on, bringing premiums up. But the mix of people would eventually shift younger, pushing premiums down — younger people tend to be healthier, and therefore cost less to insure. In addition, insurers will not have the same requirements for sharing the cost of certain benefits.

Republicans are applauding this. In fact, Budget Director Mick Mulvaney said this week that while he (and others in the administration) are shrugging off the CBO’s findings as unreliable, this was one part of the report he believed:

“Everyplace else where the market is allowed to function, quality goes up and costs go down,” he said, “and I think if you look for something the CBO may have gotten right in this report, it’s that the premiums are actually going to come down in cost.”

But it wouldn’t work out the same for everyone. Many younger Americans would end up paying less, as would people young and old alike making middle-to-upper-middle incomes, according to the CBO analysis. However, premium costs would hit many low-income adults hard, particularly older low-income adults. A 64-year-old making $26,500 a year would pay around $1,700 in premiums right now. Under the proposed changes, that person would pay $14,600, more than eight times more.

One big reason for that is that the new health care bill would change the gap between what young and old people will pay for their premiums. Currently, insurers can charge older enrollees three times what they charge someone younger. The Republican plan would up that from 3-to-1 to 5-to-1.

Big leaps in the poor and uninsured

The uninsurance rate will increase among the poor and non poor alike. But it appears it would grow the most — more than doubling — among older, low-income insurance buyers. Not coincidentally, that’s also the group that would see its cost of insurance climb in a huge way. The uninsurance rate among people ages 50 to 64 who are below 200 percent of the federal poverty level would leap from 12 percent uninsured to 30 percent.

Under the Republican bill, the deficit would shrink by $337 billion over 10 years, or $33.7 billion per year on average. That reduction would mainly come from the Medicaid rollback and, to a lesser degree, the end of Affordable Care Act subsidies. Both of those changes would reduce spending by a little more each year.

All told, Medicaid savings will come out to $880 billion over the decade. That reflects the massive changes that will be made to Medicaid under the plan. Existing enrollees could stay on, but the expanded income threshold that the Affordable Care Act set would move. That would mean fewer people could sign on in the future. Not only that, but the new plan would cap how much the federal government spends on Medicaid, making it much more expensive for states to keep up current levels of coverage.

A smaller deficit may make fiscal conservatives happy, but it’s altogether a modest shift. The deficit reduction here averages out to $33.7 billion per year. For comparison, the 2016 deficit was $587 billion.

So, the GOP better reorganize and redesign the health care plan that they want to replace the Affordable Care Act or, as I keep on saying, they will own it and 2018 election will be disastrous for the Senate and , yes, President Trump who will no longer have a majority.

Remember the principles that I have laid out for a sustainable health care system.