Christopher Ingraham reported this surprising statistic and I decided to review this horrible epidemic due to its effect on my hometown that reported almost 300 overdoses last year in our little “Mayberry” town. Also, I was depressed on reading the article in THE WEEK, “The last word”, about John and Leigh Ann Wilson’s daughter and her battle with addiction to heroin and her relapse and final overdose and death. We are losing the battle. What is the winning strategy? Look at these graphs and the data.

Opioid deaths continued to surge in 2015, surpassing 30,000 for the first time in recent history, according to CDC data released Thursday. That marks an increase of nearly 5,000 deaths from 2014. And worse is that the deaths involving powerful synthetic opiates, like fentanyl, rose by nearly 75 percent from 2014 to 2015 and I will discuss the fentanyl impact in more detail later in this post. 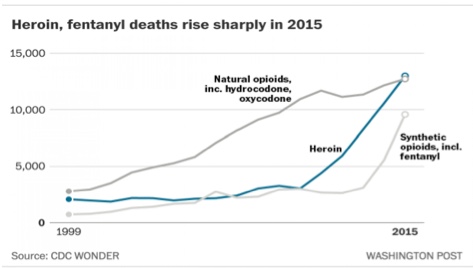 Heroin deaths spiked too, rising by more than 2,000 cases. For the first time since at least the late 1990s, there were more deaths due to heroin than to traditional opioid painkillers, like hydrocodone and oxycodone.

“The epidemic of deaths involving opioids continues to worsen,” said CDC Director Tom Frieden in a statement. “Prescription opioid misuse and use of heroin and illicitly manufactured fentanyl are intertwined and deeply troubling problems.”

In the CDC’s opioid death data, deaths may involve more than one individual drug category, so numbers in the chart above aren’t mutually exclusive. Many opioid fatalities involve a combination of drugs, often multiple types of opioids, or opioids in conjunction with other sedative substances like alcohol.

In a grim milestone, more people died from heroin-related causes than from gun homicides in 2015. As recently as 2007, gun homicides outnumbered heroin deaths by more than 5 to 1. 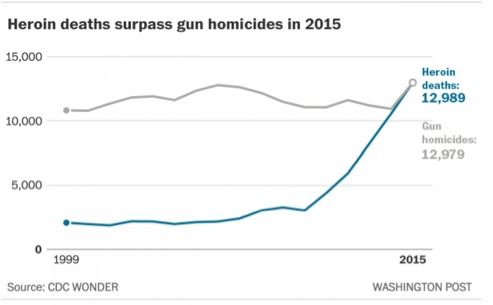 These increases come amid a year-over-year increase in mortality across the board, resulting in the first decline in American life expectancy since 1993. Congress recently passed a spending bill containing $1 billion to combat the opioid epidemic, including money for addiction treatment and prevention. “The prescription opioid and heroin epidemic continues to devastate communities and families across the country—in large part because too many people still do not get effective substance use disorder treatment,” said Michael Botticelli, Director of National Drug Control Policy, in a statement. “That is why the President has called since February for $1 billion in new funding to expand access to treatment.”

Much of the current opioid predicament stems from the explosion of prescription painkiller use in the late 1990s and early 2000s. Widespread painkiller use led to many Americans developing dependencies on the drugs. When various authorities at the state and federal levels began issuing tighter restrictions on painkillers in the late 2000s, much of that demand shifted over to the illicit market, feeding the heroin boom of the past several years.

Eddie and Allyson say they try to avoid fentanyl. But when their last dose of drugs starts to wear off, they’ll take anything to avoid withdrawal, which they describe as the flu on steroids with fever, vomiting, diarrhea and high anxiety. “It literally feels like your skin is crawling off. You’re sweating profusely,” Allyson says. “Your nose is running, your eyes are running. And that’s all you can focus on. You can’t think.”

Some drug users seek fentanyl because it’s a more immediate rush and intense high. But Allyson doesn’t like it. She says a fentanyl high fades much more quickly than heroin’s, which means she has to find more money to buy more drugs and inject more often, which leads to more risk. When fentanyl fades, she and Eddie say, they are more likely to take other drugs. “You’re getting a fast rush but it doesn’t last, so people are mixing,” Allyson says.

At 37, Allyson is having experiences most Americans don’t face until much later in life. “As of two days ago, 30 people that I know have passed away. Basically my entire generation is gone in one year,” Allyson says. “It’s the fentanyl, definitely the fentanyl.” Older drug users who have been through other epidemics say this moment with fentanyl is the worst they’ve seen. A man named Shug twists a towel in his hands.

“Addicts are dying, like, every day. It’s crazy, man,” Shug says, his eyes filling with tears. “Nobody seems to give a damn.” Shug is grateful for the needle exchange, which hasn’t lost anyone to an overdose. But on the streets outside, the death toll keeps rising.

As I watched the methadone clinic in our town I was amazed at how the “clients” were observed selling their methadone to each other and fighting over their “locked” boxes, which they were given before holidays. Molly Walked reported that methadone-related overdoses accounted for nearly one in four deaths related to prescription opioids in 2014, despite a recent decline in drug overdose deaths involving methadone, said researchers from the Centers for Disease Control and Prevention.

While the drug accounted for only 1% of all opioid prescriptions, methadone-related deaths were responsible for 22.9% of opioid-related deaths in 2014, the authors wrote in the Morbidity and Mortality Weekly Report,

In an attempt to explain this decline in methadone-related mortality, the researchers noted that the FDA issued a Public Health Advisory in December 2006 that linked methadone to reports of respiratory depression and cardiac arrhythmias, among other serious side effects. Moreover, in January 2008, there was a voluntary manufacturer restriction that limited the distribution of the 40 mg formulation of methadone.

Faul and colleagues also examined methadone prescription by insurance type and found that prescriptions for methadone accounted for a higher portion of all opioid prescriptions in the Medicaid population compared with the commercially insured population — 0.85% weighted versus 1.1%, respectively.

Further, the team investigated the role that Medicaid preferred-drug-list (PDL) policies played in these potential deaths, examining the rates of fatal and nonfatal methadone overdose among Medicaid enrollees in two states where methadone was listed as a preferred drug on its PDL (Florida and North Carolina) versus one state where methadone was not listed on the PDL (South Carolina). Not surprisingly, overdose rates were significantly lower in South Carolina than in both North Carolina and Florida:

The researchers examined three sources for these data: Drug overdose deaths and mortality rates were calculated through National Vital Statistics System Multiple Cause of Death mortality files and bridged U.S. Census data for 1999-2014. Truven Health’s MarketScan database for commercial claims and encounters was examined and compared with information from Medicaid multistate databases for 2014. Finally, Health Care Utilization Project data were examined from three states to determine whether a state’s policy was associated with higher methadone morbidity and mortality rates.

The problem was most pronounced among young people, 18-29 years old. In 2001-02, all age groups reported similar rates. 2012-13, though, the rates among young users were up nearly five-fold, more than for any other age group.

Use disorder rates were up for all income and education groups, relatively evenly. While men saw a larger bounce in their rates than their female counterparts, the gap between the two genders’ reliance remained steady.

The authors believed their results could help lead to more focused efforts to curb the heroin epidemic.

“Promising examples include expansion of access to medication-assisted treatment, educational programs in schools and community settings, overdose prevention training in concert with comprehensive naloxone hydrochloride distribution programs, and consistent use of prescription drug monitoring programs,” they wrote. But now we are seeing in states where naloxone is an over the counter drug, that addicts are trying to reach higher and higher “highs” with a “dedicated safe driver” not shooting up so that they can rescue the higher high addicts.

We are only fooling each other to think that these strategies will work. Other countries are successfully de-criminalizing the addicts but continue to treat the dealers severely.

We have to take the drugs off the market or find a way of blocking the narcotic/opioid  receptors using an implantable device to slowly release the blocking agent. We need something, a strategy that reduces the addiction potential, or reduces the amount and the ease of purchasing these drugs, etc.

What we are commonly using now in our in our armamentarium for pain control is just not working. We physicians should take some of the blame, but only some of the blame. Surgeons prescribe postoperative opioids as well as other physicians in their practices and there needs to be a change in the aim of controlling pain using multimodal therapy using non-opioids medications and other therapy.

How many overdoses and deaths are we going to allow before we get serious about this epidemic? Physicians need to take the lead in this battle and the patients need to become more involved in their care and realize that erradicating all pain is a slippery slope and can lead to chronic addiction, which often results in very bad outcomes-often death.