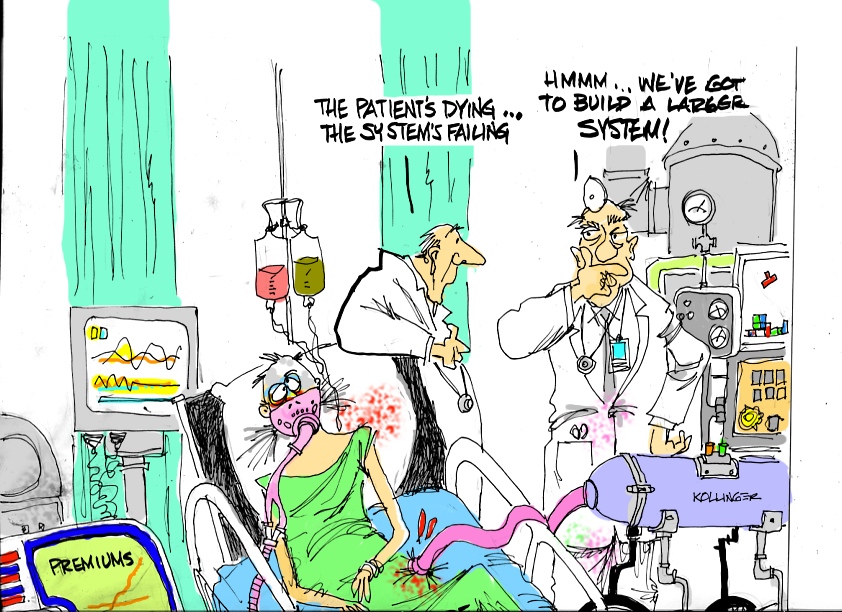 The head of the Commonwealth Fund, which compares the health systems of developed nations, pinpoints why America’s is so expensive and inefficient.

Olga Khazan reviewed the three reasons that the U.S. Health Care system is the worst. A woman has her blood pressure taken at the Care Harbor four-day free clinic, which offers free medical, dental, and vision care to around 4,000 uninsured people in Los Angeles.

According to the Commonwealth Fund, which regularly ranks the health systems of a handful of developed countries, the best countries for health care are the United Kingdom, the Netherlands, and Australia.

The lowest performer? The United States, even though it spends the most. “And this is consistent across 20 years,” said the Commonwealth Fund’s president, David Blumenthal, on Friday at the Spotlight Health Festival, which is co-hosted by the Aspen Institute and The Atlantic.

Blumenthal laid out three reasons why the United States lags behind its peers so consistently. It all comes down to:

Together, these reasons help explain why U.S. life expectancy has, for the first time since the 1960s, recently gone down for two years in a row.

Yuval Rosenbery of The Fiscal Times reported that in a The New York Times op-ed, Ezekiel Emanuel, a health policy expert, and a former adviser in the Obama administration, and Victor Fuchs, a Stanford health economist, look to clarify what they call “four fundamental health care fallacies”:

4. Price transparency can bring down health care costs.“Over 80 percent of the cost of medical care is paid by private and public insurance. Patients have little incentive to seek out the cheapest provider. When pricing websites exist, few patients use them. … Furthermore, price considerations are useful for choosing only about 40 percent of procedures — routine services like colonoscopies, M.R.I. scans and laboratory tests. Most of the expensive services — think heart catheterizations, cancer chemotherapy, and organ transplants — are not the kind of thing you decide based on price.”

Shannon Firth, Washington correspondent of the MedPage, noted that Dr. Barbara McAneny still doesn’t believe in the Single Payer system for health care but she and the AMA applauds a ban on pharmacy gag clause and APMs.A single-payer healthcare system in the U.S. would break her practice, said the president of the American Medical Association (AMA), who argued that Medicare and other government programs as currently structured simply don’t pay enough.

“We need a payment system that the country can afford,” said Barbara McAneny, MD, AMA president, and a practicing oncologist/hematologist in New Mexico.

McAneny pointed out that in the portion of her practice that serves the Navajo Nation, 70% of payments are from governmental payers, and “I have struggled for the last 10 years to keep that practice breaking even.”

Medicare payments are designed to cover about 80% of the cost of doing business, McAneny said. If all her commercial patients were to pay Medicare rates, there would be no other place from which to shift costs, she explained. “My doors would be closed. I would no longer be able to make payroll.”

Moving to a single-payer healthcare system won’t fix what’s broken, she said during a meeting with reporters Tuesday to discuss a variety of issues, including drug pricing, value-based payments, and turf battles.

While she said she strongly supported Medicaid expansion in New Mexico, McAneny expressed skepticism about the possibility of a Medicaid “buy-in,” which would allow people to purchase Medicaid-based public insurance plans.

She pointed out that only about a quarter of the population in New Mexico has commercial insurance, and “Medicaid and Medicare do not cover the expenses of providing care.” With fewer patients to cost-shift from, independent practices and small rural practices “would not be able to keep the lights on.”

McAneny also discussed the Trump administration’s recent efforts to curb drug prices and the challenge of transitioning from fee-for-service to value-based care.

She called the latest bill banning pharmacy gag clauses”really important. When patients discover that they can pay less than the co-pay to buy the drug, they need to know that because patients are going broke out there, trying to buy their drugs.”

Gag clauses prevent pharmacists from telling customers whether paying for their prescription might be cheaper if they paid the cash price instead of using their insurance.

Earlier this week, the Department of Health and Human Services (HHS) announced that drug makers would need to include the list price of any drug paid for by Medicare or Medicaid in their TV advertisements. In an AMA press release, McAneny stated that the HHS move seemed like “a step in the right direction,” although the AMA is opposed to direct-to-consumer advertising in general.

“There’s so much the public doesn’t understand about the market, including the true costs of research and development and the role of middlemen, like pharmacy benefit managers and insurance mark-ups, she said.

“Before we suggest any sort of treatment, we think it’ s a good idea to make the diagnosis, and that means really understanding that entire process, which means they’re going to have to pull back the curtain and let us, the healthcare community, really take a look at that and figure out what adds value and what doesn’t,” she said.

McAneny was less supportive of changing the way Part B drugs are bought and paid for. In May, HHS Secretary Alex Azar suggested moving some Part B drugs administered in a physician’s office into the Part D program, in an attempt to negotiate more competitive prices.

“We see all the time places where healthcare dollars get wasted, and patients don’t get what they want,” she said, so allowing doctors to come up with new methods of care delivery, which incorporate things they’ve always wanted to do for their patients, has “tremendous potential.”

McAneny said she hopes Azar will test as many pilots projects as possible, and see what works, but not penalize groups who fail. “If you’re trying something innovative … sometimes you’re going to be wrong, and those people shouldn’t have to lose their practices… they should be allowed to fail quickly, and move on to something else,” she stated.

McAneny said she will present an alternative model to the PTAC in December.

Her proposed model integrates clinical data from a group of oncology practices with claims data “to set accurate and realistic targets that reflect what oncologists can actually control, rather than the total cost of care,” McAneny told MedPage Today in an email.

“We will measure quality by compliance with physician derived pathways that reflect the best care in the medical literature… [and] improve patient satisfaction by getting patients the care they need, when they need it, at a practice site that knows them and understands what they are going through.”

Another challenge in healthcare is the scope of practice, with some physicians expressing concern that nurse practitioners and physicians assistants (PAs) are encroaching on their territory.

McAneny acknowledged that concern, noting that primary care physicians must be “incredible diagnosticians,” she said. “They need to know when a sore throat is a sore throat and when it’s really cancer.”

“Everybody has a place in healthcare,” McAneny stressed, “but I do not feel that a nurse practitioner who has gone to nursing school and done one extra year… and has not practiced in that post-doc process, has the same level of expertise to be that diagnostician.”

A new report from the AMA’s Council on Medical Service, “Covering the Uninsured Under the AMA Proposal for Reform,” also reaffirms that stance, calling for improvements in the Affordable Care Act — increasing subsidies, and expanding eligibility and the size of cost-sharing reductions — rather than “threatening the stability of coverage for those individuals who are generally satisfied with their coverage.”

There will be resolutions calling on the AMA to support federal laws that would not eliminate the private health insurance market and to collect data comparing Medicare reimbursement to the cost of delivering services.

ACTION ALERT: The A.M.A. must support Medicare for All!

But we find out that the President of the AMA may not reflect the total view of the national organization of physicians. On June 8, 2019, at 1:30 PM CST, students, physicians, nurses, allied health care workers, and activists from around the country will unite in Chicago to protest the annual meeting of the American Medical Association (A.M.A.).

Representatives of a rapidly growing coalition of Medicare for All supporters, including National Nurses United, Students for a National Health Program, Physicians for a National Health Program, People’s Action, Public Citizen, The Center for Popular Democracy, The Jane Addams Senior Caucus, various labor unions, teachers, activists, and more, will be taking a stand AGAINST corporate greed, misleading advertising, and the profit motive in health care.

And for a system that guarantees quality health care and choice of provider for all Americans, regardless of income.

The action recalls similar campaigns waged throughout the 1960s in which members of the African-American-led National Medical Association, the Medical Committee for Human Rights and the Poor People’s Campaign picketed the A.M.A.’s annual meetings because of its refusal to take a stand against segregated medical services and for allowing local medical societies to discriminate against physicians and patients of color.

When we join together, we can send a powerful message to the A.M.A. and corporate medicine that we won’t stop until every American is guaranteed quality medical care without going into debt or bankruptcy.

Everybody in, nobody out!

Also, I need to comment on that sixteen-year-old who was invited to a United Nation session where she berated the countries all about not taking up the environmental banner and cleaning up the world. She is a spoiled “child” who knows nothing about economics as well as politics and what it would take to move ahead with cleaning up the environment. Where are all the countries to get the trillions of dollars or Euros, etc. to make the changes that she demands?

Greta Thunberg excoriated world leaders for their “betrayal” of young people through their inertia over the climate crisis at a United Nations summit that failed to deliver ambitious new commitments to address dangerous global heating.

If world leaders choose to fail us, my generation will never forgive them

In a stinging speech on Monday, the teenage Swedish climate activist told governments that “you are still not mature enough to tell it like it is. You are failing us. But the young people are starting to understand your betrayal.”

But Thunberg predicted the summit would not deliver any new plans in line with the radical cuts in greenhouse gas emissions that scientists say are needed to avoid catastrophic climate breakdown.

“You have stolen my dreams and my childhood with your empty words,” a visibly emotional Thunberg said.

“The eyes of all future generations are upon you. And if you choose to fail us I say we will never forgive you. We will not let you get away with this. Right here, right now is where we draw the line.”

Suggestion for Miss Thunberg, get an education! Go to the university and get the real facts. Get an education so you can understand the system and the only ways that we can truly deal with our environmental issues! Instead, you sail around the world! Must be nice instead of working or going to school!

And back to health care next week.