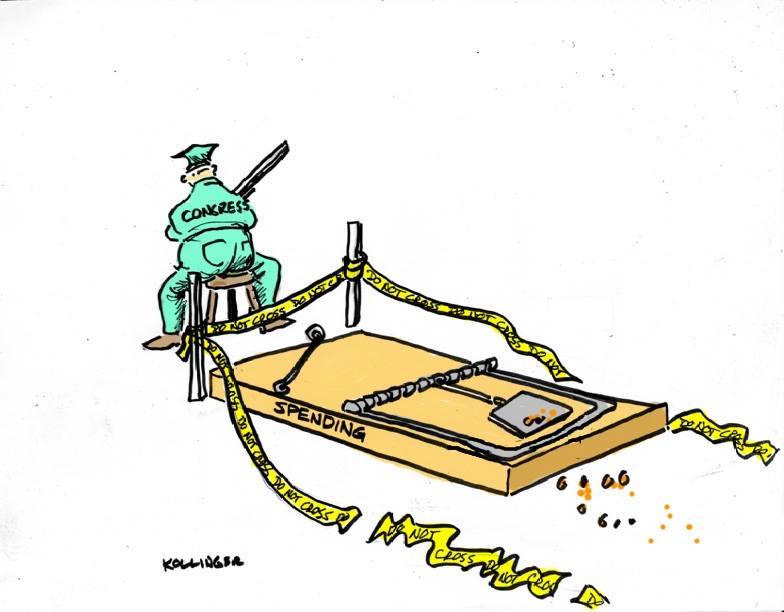 Susannah Luthi reported that the federal government officially shut down Friday night as Senate leaders failed to agree to a short-term spending deal that satisfied Democrats’ concerns about immigration and raising the budget caps.

Following a late huddle in the office of Minority Leader Charles Schumer (D-N.Y.), Democrats largely united to vote against the measure passed by the House of Representatives on Thursday. The House GOP-driven continuing budget resolution would have funded the government through Feb. 16, as well as a six-year extension for the Children’s Health Insurance Program.

As a result, CHIP remains in limbo at a time when several states are reaching the end of their money. They may find themselves once again contemplating when and how to terminate their programs depending on how long the shutdown lasts.

CHIP is now back in the waiting game along with expired Medicare programs and disproportionate share hospitals whose federal Medicaid payment cuts went into effect as of Oct. 1.

Senate Majority Leader Mitch McConnell (R-Ky.) put the blame squarely on Democrats, accusing them of holding the budget hostage in order to get a deal on “Dreamers” under the Deferred Action for Childhood Arrivals program, or DACA. Meanwhile, Minority Leaders Charles Schumer (D-N.Y.) accused GOP leaders of failing to negotiate honestly with Democrats.

McConnell said he will soon seek a vote on a continuing resolution that keeps the government funded until Feb. 8.

Delays of certain Affordable Care Act taxes, which would have gone through with the House-passed measure, are also on hold.

CHIP funding expired more than 110 days ago and states that as recently as two days ago believed they would see their rapidly dwindling programs funded—staving off imminent plans to close their programs—are reaching a state of panic. They don’t know whether to forge ahead with plans to freeze enrollment or tell families that their children will lose coverage. States also don’t know how much money they have for their budgets.

The program has become an unfortunate symbol of today’s political climate. Lawmakers’ inter-party fighting has reached such an extreme that the popular, bipartisan program that insures 9 million kids keeps getting tossed around like a rapidly deflating political football.

Ms. Luthi again mentions that Congressional gridlock, as evidenced by Friday’s eventual outcome, showed no signs of giving in Saturday night even as lawmakers traded accusations of holding the Children’s Health Insurance Program hostage in exchange for a short-term spending deal.

On Saturday, Senate Minority Leader Charles Schumer (D-N.Y.) likened the GOP use of CHIP as the sweetener for the House-passed continuing budget resolution as pitting children against one another, arguing Republicans continue to hold the line against extending the legal status of undocumented immigrants who arrived as children.

But as the political posturing continues, state CHIP programs teeter on the verge of collapse. The Medicaid and CHIP Payment and Access Commission, which advise Congress, projected 27states and the District of Columbia will exhaust funds by the end of March. Another 18 states will run out of money by June. Only Illinois would be able to sustain its CHIP program for the entire year should Congress fail to reauthorize the program.

The House’s continuing resolution, which would have kept the government running for another month, included a six-year reauthorization of CHIP.

While aides on both sides speculate the pressure of a shuttered government might push the two parties toward a deal, no one sees an immediate resolution in the offing. Democrats show no signs of going along with the three-week budget continuing resolution floated by Senate Majority Leader Mitch McConnell (R-Ky.).

One House GOP aide dismissed the idea of a four-day patch on the grounds it isn’t enough time for the parties to reach a deal when they’re so far apart.

The gridlock dims any hope the states running short on CHIP funds had for an easy resolution. And the CMS isn’t providing much guidance on how states should proceed or how it will allocate $2.85 billion appropriated in Dec. 22 continuing resolution.

Cathy Caldwell, CHIP director for Alabama, said she still doesn’t know how much money she has to budget with before the ephemeral funding deadline ends. Because it’s a fee-for-service state, Alabama would have to shutter it’s program a month before the money runs out so provider claims from the previous month can be paid up.

“The bottom line is that our plan right this minute is just to hold on,” she said.

Before the Dec. 22 budget patch, Caldwell had triggered plans to freeze enrollment Jan. 1 and terminate the program Feb. 1, but these plans are on hold pending congressional action.

Virginia and Colorado say they can fund their programs through February. Connecticut, which actually froze enrollment between Christmas and New Year’s, changed the projected end-date on its website from the end of February until the end of March.

Instability for these states is made worse by the fact the programs can’t immediately close. Temporary shuttering is costly, and Virginia’s health services director Linda Nablo said the state’s budget division has spent “a ridiculous amount of time” just trying to keep up with the immediate financial outlook for the program.

“I had never envisioned that the states could keep limping along and that Congress would let them limp along even though by then there was lots of media coverage, and lots of blasting of Congress for not authorizing this very popular and productive program for kids,” Nablo said. “It seems to be a symbol of dysfunction.”

How has America Healthcare Changed During Trump’s First Year In Office, and now by the Numbers?

Trump never got to sign a health care overhaul bill that repealed the Affordable Care Act (also known as Obamacare). But he did sign a tax bill that eliminated the penalty for not having insurance — the mechanism for enforcing one of Obamacare’s most important parts, the individual mandate. That won’t go into effect until 2019, and it could mean millions more uninsured in the coming years, according to one estimate. However, the healthcare picture in America already is less than rosy — premiums continue to rise, as do the shares of those premiums that workers have to pay. 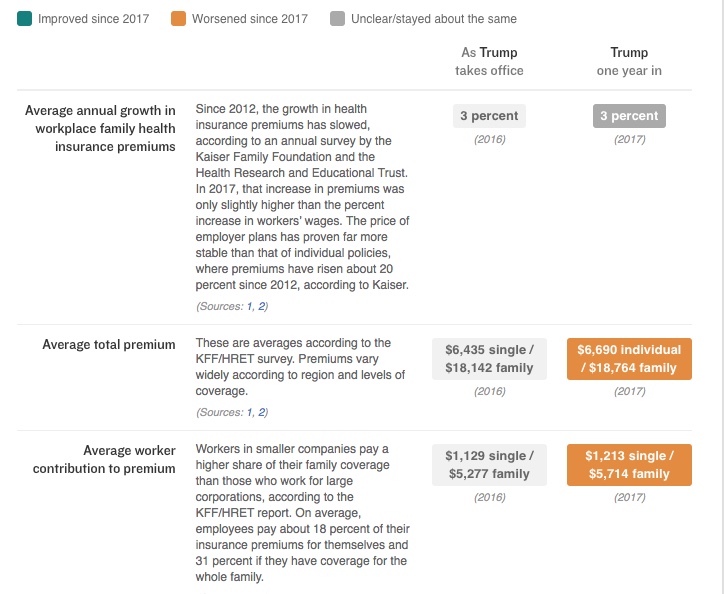 Many health outcome indicators (like life expectancy and the obesity rate) lag by a few years, so we can’t tell how Americans fared on those in the first year of Trump’s presidency. But a few of the stats we do have show that America’s kids are, at least in two areas, engaging in fewer risky behaviors than in 2016. The share of teens who have ever been drunk or smoked a cigarette dipped in 2017, though the share who have used illicit drugs climbed slightly.

And Now an Interesting Concept, the Idea that Healthcare For The Uninsured Is Wasteful (For A Surprising Reason)

American physicians dole out lots of unnecessary medical care to their patients.  They prescribe things like antibiotics for people with viral infections, order expensive CT scans for patients with transitory back pain, and obtain screening EKGs for people with no signs or symptoms of heart disease. Some critics even accuse physicians of ordering such services to bolster their revenue.

So what happens when uninsured patients make it to the doctor’s office with coughs, low back pain, or other problems? Do physicians stop ordering all these unnecessary tests and services, out of recognition that most of these patients won’t be able to pay?

A study out of Harvard by Michael Barnett and colleagues provides a rigorous answer to this question. The researchers evaluated how often patients received any of a slew of unnecessary services. They compared patients with private insurance to those with Medicaid (which generally reimburses physicians much less generously than private insurance), and also to those with no insurance.

In short, there’s way too much wasteful care, regardless of what kind of insurance people have.

In addition, among people with back and neck pain, ¼ of privately insured patients receive narcotics.

The percent receiving narcotics rises to over 1/3 of Medicaid enrollees and almost ½ of uninsured patients.

By contrast, unnecessary CT and MRI scans are less common among uninsured patients than among those with either Medicaid or private insurance.

So what’s going on here? I have a few guesses.

But don’t dismiss the role of financial incentives.

Healthcare providers are under tremendous financial pressure. Eliminating wasteful care would put lots of people out of business. It is naive to think that the 20% rate of unnecessary care has nothing to do with financial interests.

We have an epidemic of unnecessary care in the U.S. Giving patients a financial stake in their healthcare—exposing them to more out-of-pocket costs—isn’t likely to be a quick cure for this problem. Solutions to prevent unnecessary medical care should primarily focus on helping physicians change their habits.

Hopefully, the Senate will get their priorities in proper order and vote to finance the government and then consider fixing the flawed DACA program and the immigration policy instead of blaming each other, the President and destroying our great Country.